Chhurpi cheese otherwise known as Nepalese cheese or Durkha is one of the many varieties of cheeses made in the world. It is made from yak’s milk. Not just in Nepal, this is made in several parts of India like Kashmir, Sikkim and other mountainous regions of Bhutan, Tibet where yaks are common.

Do you know, Chhurpi cheese has been found to be incredibly liked by dogs as much as humans?

Yes, it is incredibly healthy when fed to your dog in moderation mostly because of its high protein content.

How is Chhurpi cheese made?

The process of making chhurpi cheese from yak’s milk is fairly simple. It can be made at home if you can get hands on some buttermilk. Traditionally it is prepared in dairy farms by boiling buttermilk. Once the boiled mixture becomes denser, the solid mass is separated from the liquid. This solid mass is then shaped as desired and hanged to dry further for 1-2 days. Once the drying process is over, the cheese is allowed to ferment to give it it’s unique sourly taste. 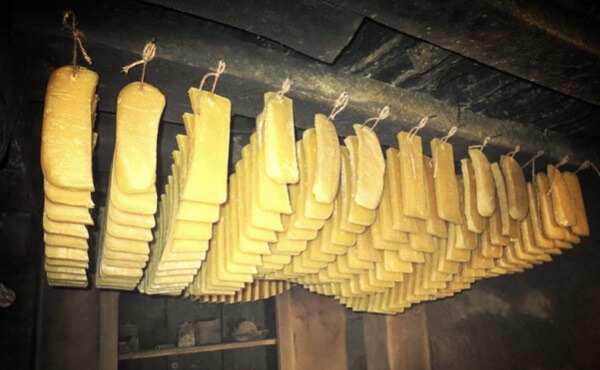 Chhurpi can be consumed in a variety of ways – it can be used as an appetizer or in making dumplings and momos. Many add it to other vegetables, noodles, and soups as an ingredient. It is almost like an essential condiment for the Nepalese in many of their dishes like a filling vegetable.

One unique use of chhurpi is as a tasty snack for dogs. Because of the nice combination of sweet and sour, most canines like it. While most cheese is associated with high-fat content, chhurpi is rich in protein instead. Thus, you can delight your dog with chhurpi without worrying about obesity. Since chhurpi is used as gum by many Nepalese, it can be a good dental chew for your dog. When well dried, this cheese takes a hard form. But on wetting it with saliva in the mouth, it becomes softer and chewy.

Tibetans use it as an alternative to veggies in their dishes and as a staple food. It is tasty and healthy for dogs and humans alike.

Countries the manufacture chhurpi cheese are exporting it to other countries like USA, UK where it is in great demand. Dog treat manufacturers are also increasingly making treats and snacks with this.

Because it doesn’t need artificial preservatives and is completely natural, turning it into a treat for canines is incredibly easy for doing it on a large scale. Chhurpi once prepared can easily stay edible for 4-5 years if kept in a healthy environment.

Have you ever given your dog chhurpi or interested to make it at home? If yes, did your dog like it? Do let us know in the comments below.